We know what it is for, we who have used it


The exhibition We know what it is for, we who have used it emerges from the long-term research project And yet my mask is powerful by Palestinian artist-duo Basel Abbas and Ruanne Abou-Rahme. For this project they returned to sites of Palestinian villages in Israel that were emptied and destroyed in 1948. Following the faint traces of the past, the artists developed a reversed museology as a strategy to breathe new life into these places. Through the sampling of myths, images, texts, sounds and artifacts from different era’s, the artists draw the contours of a parallel or even a-historical time that is not occupied: a counter-mythology as an alternative to the dominant, often colonial narratives with which we describe our present.


At the heart of Abbas and Abou-Rahme’s project lie 9000-year old Neolithic masks, which were excavated from different areas in the West Bank. The objects have been withdrawn from the public eye after they have been acquired by private collections. The artists ‘hacked’ the masks by secretly photographing them that one time they were on public display in the Israel Museum, to then reproduced them using 3D technology. Abbas and Abou-Rahme wield the archeological finds – that predate monotheistic religions and the current political conflicts in the area – as prosthetics through which to re-examine or re-imagine the past and to offer new ways to understand history and a sense of time and place in the Middle East, consciously moving away from the media’s focus on endless crisis and violence in the region. 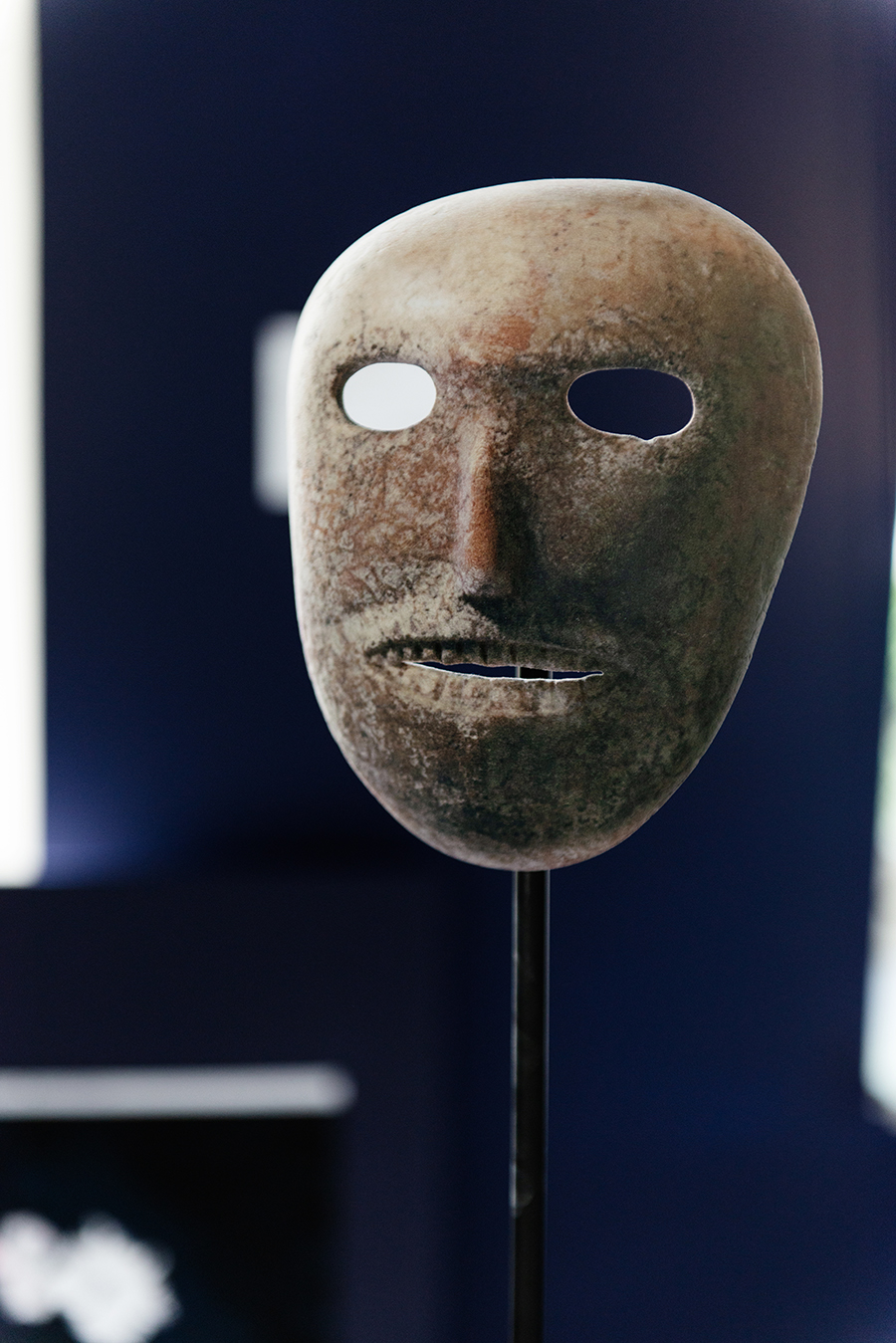 And yet my mask is powerful. Part 1

The exhibition We know what it is for, we who have used it has three parts. Part 1 is a video and sound installation. The camera follows a group of young people a return trip to their ancestral land that leads them to the site of on of the destroyed Palestinian village. We see them uncover and wear the 3D printed masks that originate from that very same land. The masks allow them to become other, to become anonymous and dive into a world where they are not meant to be. The artists have taken Adrienne Rich’s feminist poem Diving into the Wreck (1971 – 72), from which the project an exhibition draw their titles, as a script, framing the young people’s rituals and movements that bring new live into the abandoned village. Transposed in English and Arabic, the text forgoes metaphors – seeking not the story of the wreck, but the wreck itself – and searches for what can possibly be retrieved from such a disastrous site. Rich’s feminist screed describes a solitary figure who draws on existing structures yet embarks alone toward a society without domination. Abbas and Abou-Rahme repurpose her words to question colonial legacies and occupation. 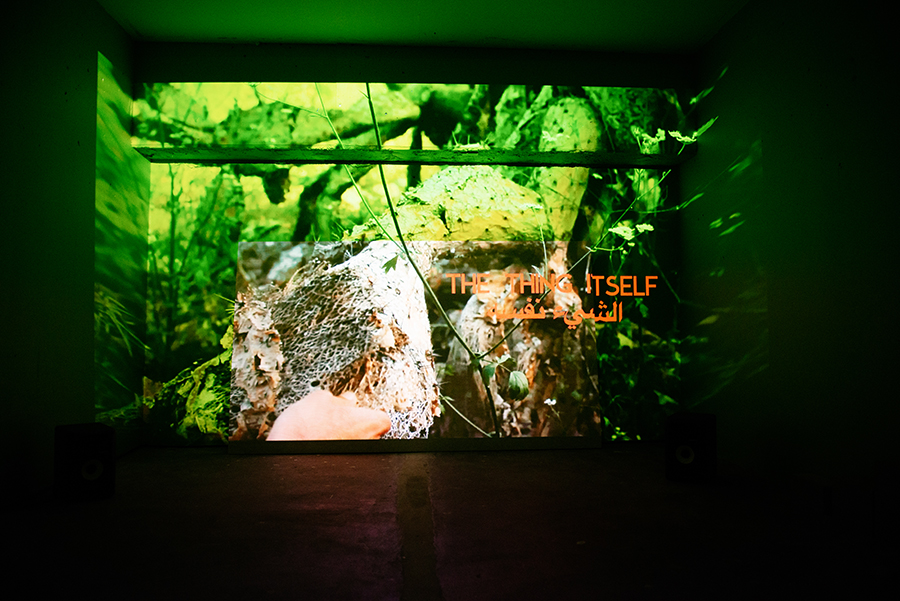 And yet my mask is powerful. Part 2

The second part of the exhibition resembles a scholarly study or museum storage encompassing both prehistoric time and a digital future. The installation unfolds the artists’ multi-layered, associative research process. Printed images, notes and fragments of scientific studies overlap with one another against a deep blue background, while masks are unpacked in the midst of a living herbarium of plantspecimens. Abbas en Abou-Rahme sourced this vegetation from the destroyed villages that are often hard to find. Yet the signs of the old vegetation, such as a small cactus, the traces of wild asparagus or a lone pomegranate tree, lead you back to the remains. And every spring the contours of the villages rise like phoenixes from its ashes, when the vegetation blooms again.


We know what it is for, we who have used it

In the third part of the exhibition the masks again play a lead role. Abbas and Abou-Rahme gave the masks a voice, by writing texts that move between thinking about the genealogy of the mask and the ways in which artifacts can not only be freed from historic collections, but can also be activated as living matter again. The texts take on the form of stories that think through this process of transforming the mask from fossil into a live material, as a “return to living time”. 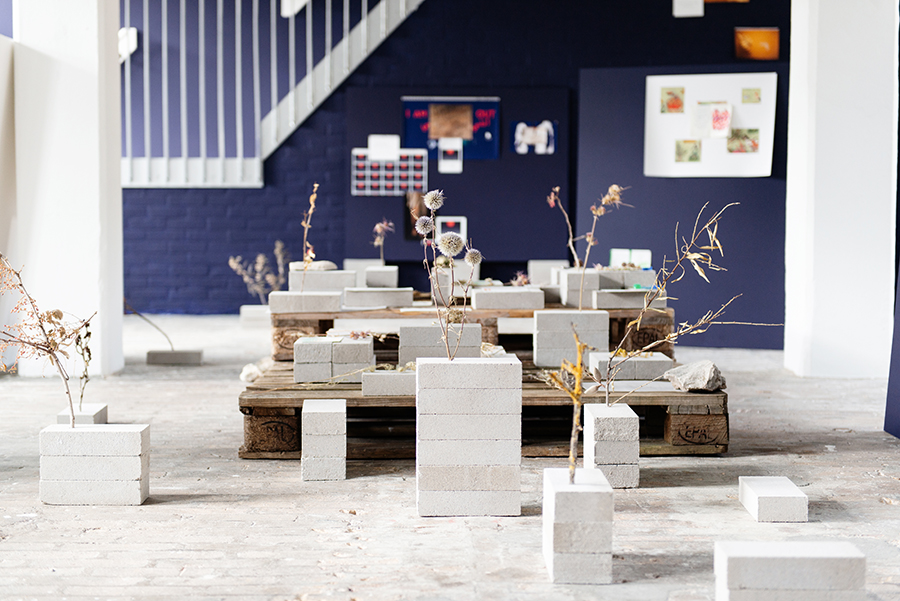 
We know what it is for, we who have used it is kindly supported by the City of Rotterdam, Mondriaan Fonds, VSB Fonds, Stichting ter Bevordering van Volkskracht and Art Jameel.

Installation views 'We know what it is for, we who have used it' by Basel Abbas and Ruanne About-Rahme, 2018. Photo: LNDWstudio