The Story of the Stone


The Story of the Stone reflects on how the perception of concepts and meanings seem to be anchored and represented in different media. How does our perception of materials influence the meaning that is associated with a particular material? Do culturally determined expectations influence our understanding of the world? The Story of the Stone’s title derived from one of the most important novels in Chinese literature. In the book, the story of a wealthy family history is told by the account of an intelligent stone. The exhibition examined the shifting relationship between man and material. The Story of the Stone conveys that typically considered “dead” materials, rather, seem to be full of life. 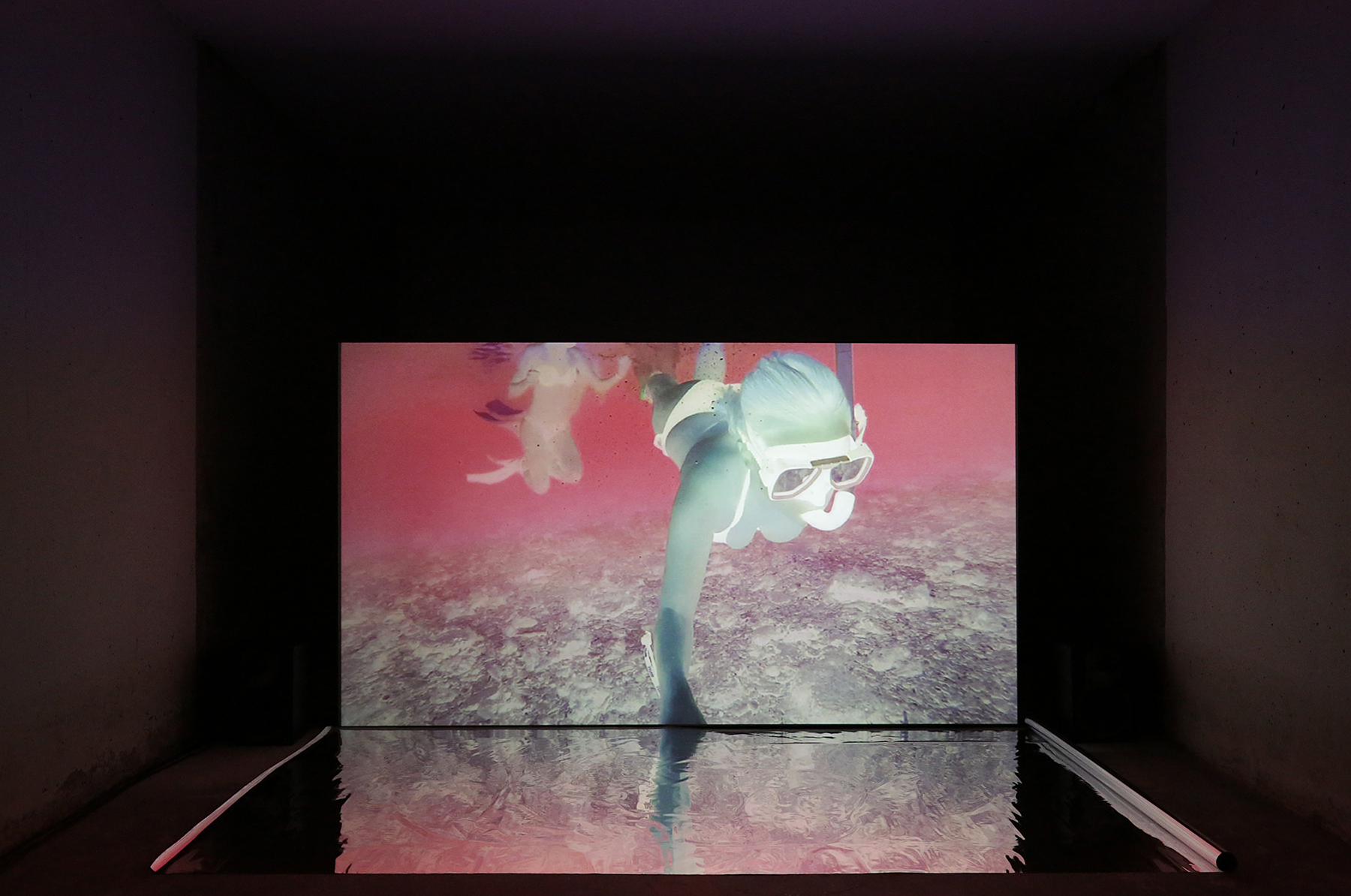 Zarouhie Abdalian’s installations and sculptures evoke a direct relationship with the specific characteristics of a place. Stemming from research of the history and physical elements of a space, Abdalian focuses on the dynamics between viewers and a place to arrive at subtle, yet clear interventions that transform the experience of the space in question. In the bathhouse Abdalian shows a new work: Slump, in which decadence and excess take a central position. The work refers to one of the wet dreams of the protagonist from the story of the stone. A wet dream represents its own surfeit. Like a stain made of dripped silk, Slump reminds us of something that has been used, something that happened in the imagination. 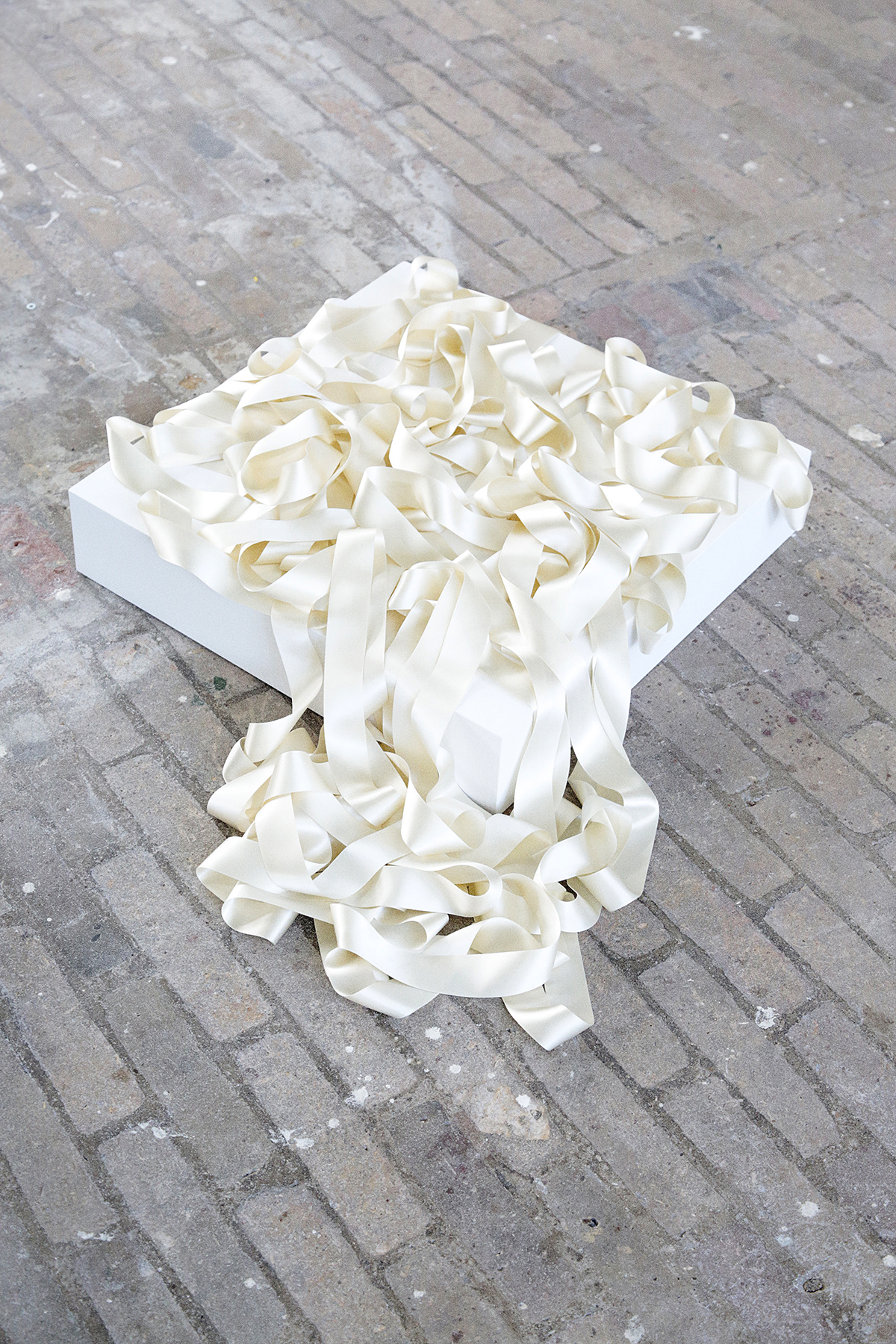 At the heart of Helen Dowling’s practice lies the investigation of formal qualities of language in relation to moving images, mimesis and anthropomorphism – the attribution of human characteristics to non-human things. Her videos invite viewers to participate in the physical and mental possibilities and limitations of people, who are portrayed and processed by the artist in such a way that each deviation results in a medial intervention. She often manipulates image and sound, which lead to fragmented perception. Dowling employs the process of filming and editing material in order to influence and simultaneously expose the intention and construction of the work. In These are my friendly hands we see a series of anthropomorphic forms. The soundtrack of the video consists of electronic interferences that – in our perception – are transformed into birdsong. For her newest work, Helen Dowling traveled to La Gomera, a Spanish colony off the coast of Africa. She researched the “spoken” language Silbo Gomera there. This rare, pre-linguistic language inspired Dowling to make a video, in which she connects rhythm and ritual to principles of perception and evolution. The video shows similarities with early, abstract cinema. Unlike with These are my friendly hands, for this work the artist employed a classical soundtrack that is comprised of material from live performances. The sound guides the viewer through a continuous stream of images that contain abstracted source material that Dowling collected on the internet and subsequently combined with her own recordings. Beyond language, Dowling offers new meaning to famous scenes through the rhythm of the soundtrack, in order for the viewer to enter into a new relationship with the images. 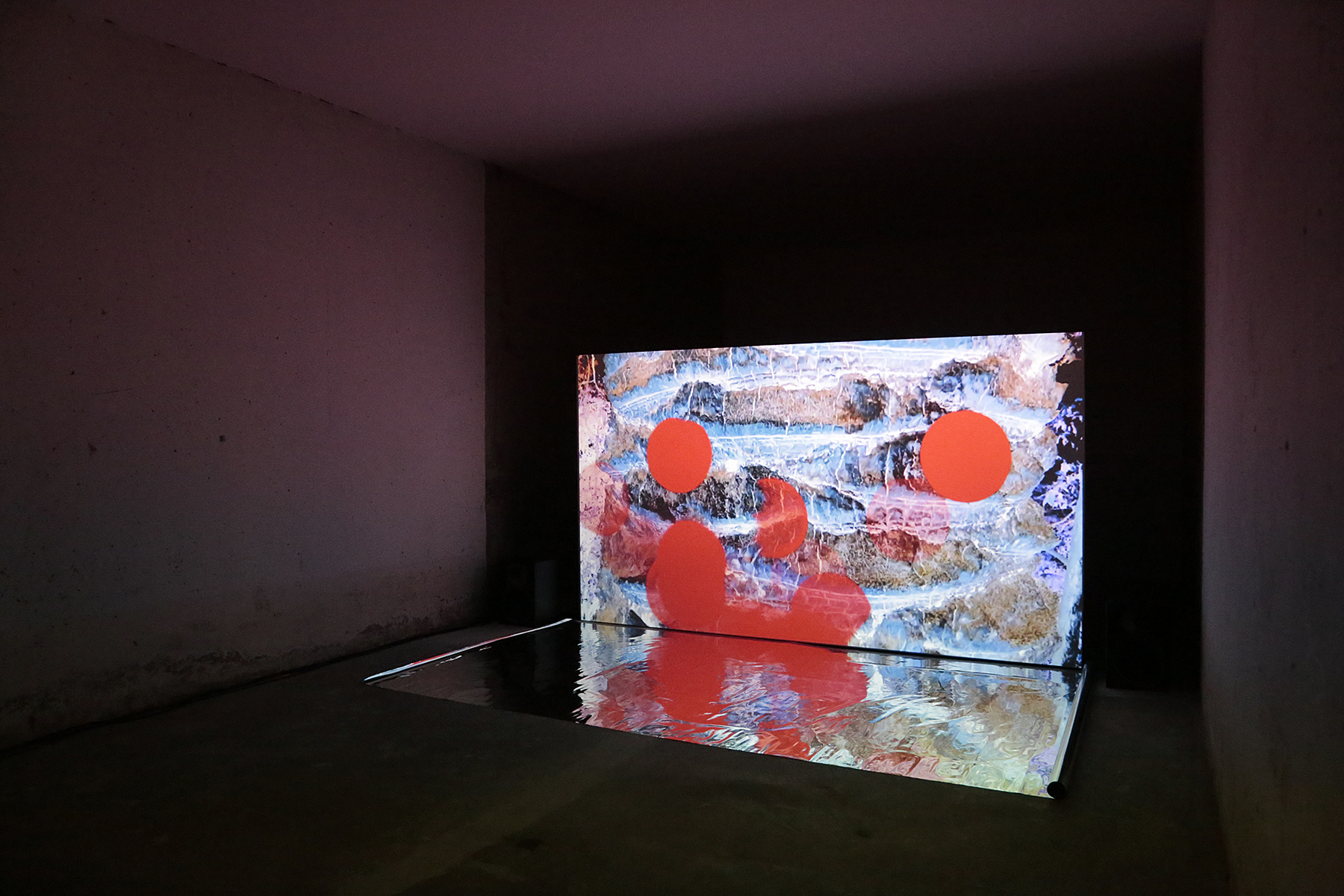 Writing acts as a process of self-awareness for Nickel van Duijvenboden. He writes about perception in all its aspects, particularly about absence, silence, landscape, alienation and trauma. This realm is accessible through photography and other forms of registration that comprise an essential – albeit largely invisible – part of his process. The vast amount of personal letters that Van Duijvenboden wrote to colleagues and family members form a continuously developing archive in which there exists an ongoing tension between the individual words, the letters, and the archive as a whole. The original, handwritten letters are translated by Van Duijvenboden and often printed in mirror image in order to create a clear distance from the original text. Combined with different materials from his personal archive, a layered experience of exchange occurs, in which ethics of intimacy and communication, initiation into philosophy and the postponement of art production are transmitted. 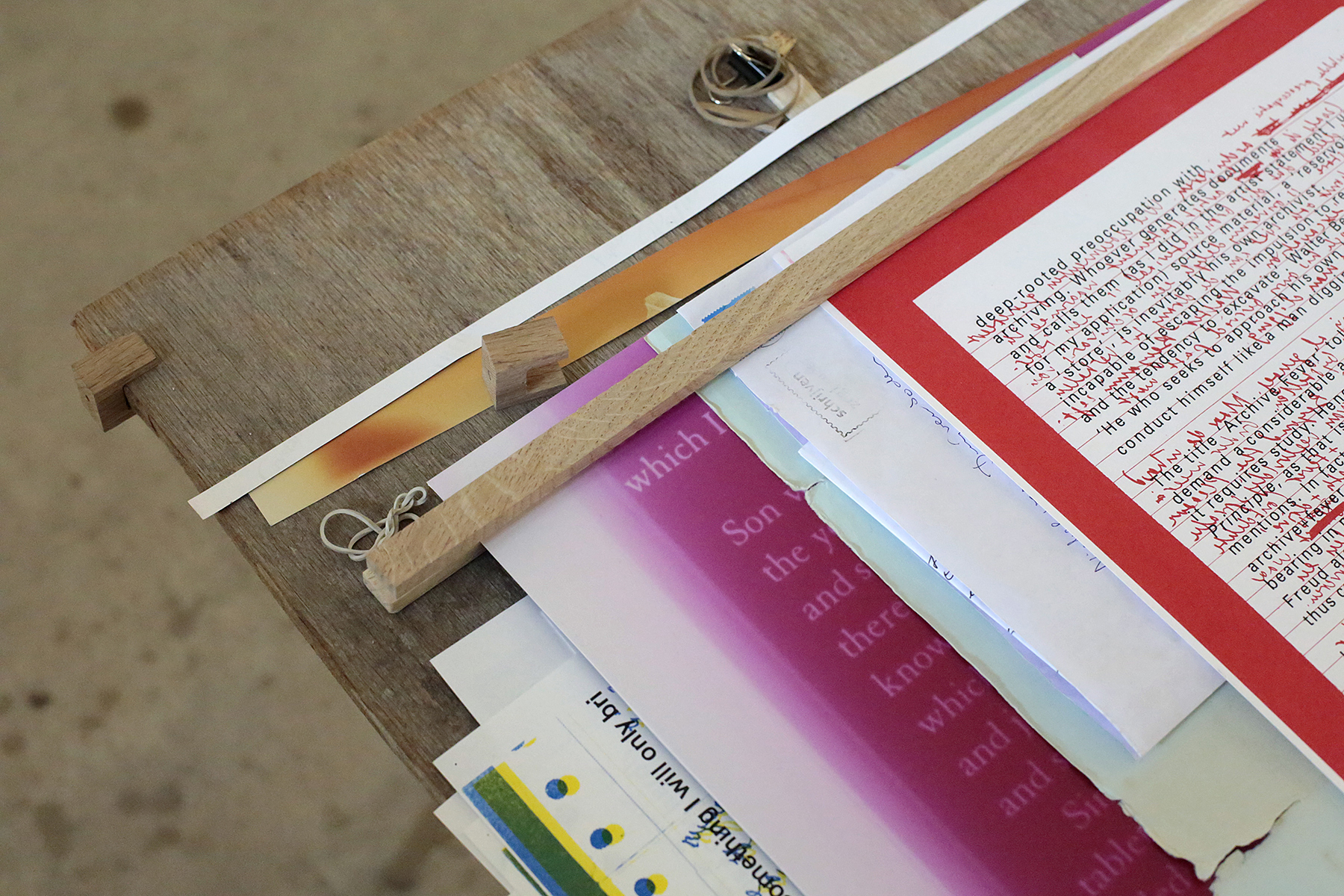 Nickel van Duijvenboden, Contingence for beginners (to and from), installation view A Tale of a Tub, 2015. Photo: Amanda Mullee

Judith Hopf explores the way in which we are shaped by our social environment in her performances, installations and videos. Her work encourages the viewer to engage psychologically in relation to object and meaning. Focusing on the human body, in relation to other people and objects, she combines personal experiences with political ideas. Two branches pierce through the walls of the bathhouse. They are reminiscent of overgrown ruins. By casting the branches in bronze, the artist ascribes them with a certain authority, as if to resist future renovations; a poetic form of protest.Some End of Things: The Conception of Youth is a video that assigns expression to social intolerance. The protagonist tries to enter a modernist building without success, due to the form of his egg-shaped costume. The film suggests the presence of increasing societal pressures and the risk of exclusion from both the real and virtual world for those who fail to comply with those pressures. 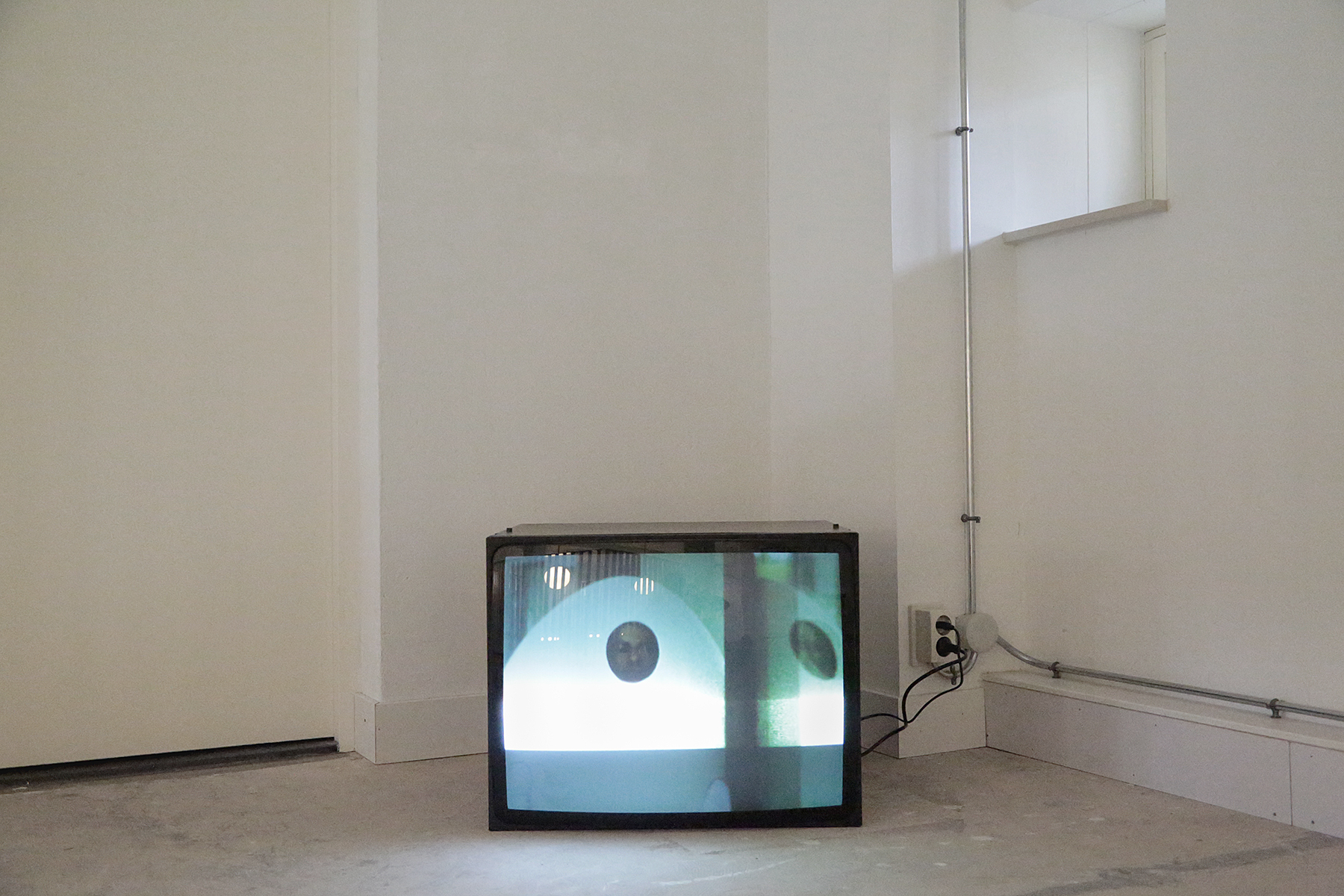 Judith Hopf, Some End of Things: The Conception of Youth, installation view A Tale of a Tub, 2015. Photo: Amanda Mullee

Ian Kiaer’s practice deals with theoretical ideas about human interaction and natural and technological surroundings. He uses these theories as a departure point to make poetic sculptures that simultaneously function as conceptual models. His sculptures, drawings and installations remove themselves from language and invite the viewer to engage in a direct experience. Tooth House, cleft and Tooth House, wall consist of a series of fragile fragments that play with scale, material and assembly. The works are a structure in which ideas can take shape. The first parts of the titles refer to Frederick Kiesler’s (1890-1965) Magical Architecture, in which a series of anthropomorphic forms would lead to a (more) universal experience of our inhabited space. 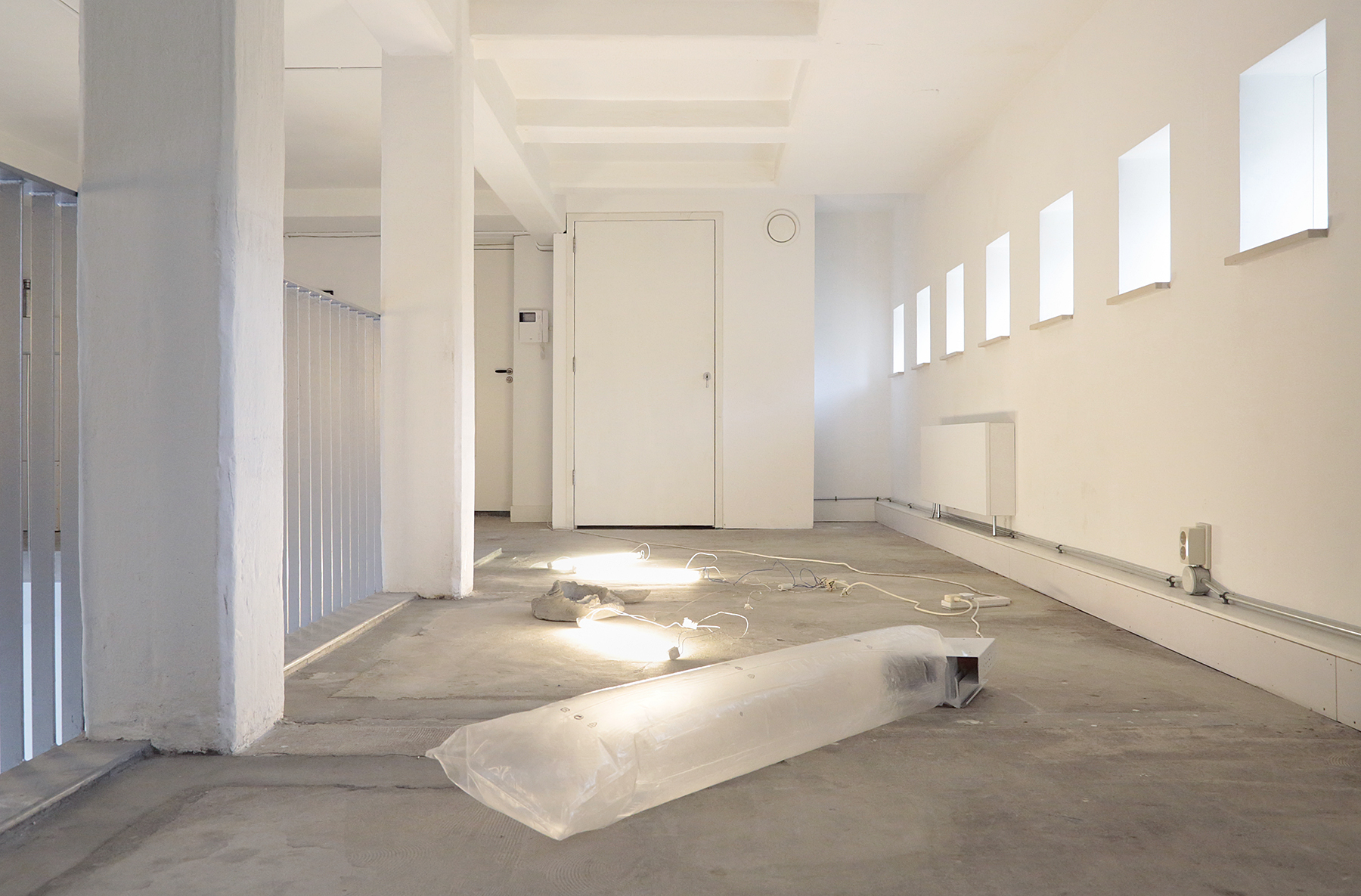 Jason Loebs connects the deconstruction of industrial materials to thinking about consumerism and the passage of time. For The Story of the Stone Loebs shows works that are comprised of plastic mats that usually function as under floor heating. Beyond the visual gesture, heat itself becomes sculptural material by placing the mats distinctively within the space, whilst simultaneously flowing through the monumental stone floor of the bathhouse. Nowadays most cash register receipts are printed on heat sensitive paper. Amplifier for the qualified self consists of a group of receipts that were collected by the artist during the production period of a recent exhibition. By heating the paper, individual purchases are no longer recognizable and an abstract composition develops. The work brings heat in relation to financial transactions and the entropic quality of our economic system.


The Story of the Stone is generously supported by Gemeente Rotterdam, Stichting Stokroos and private donors.

Installation views The Story of the Stone at A Tale of a Tub, 2015. Photos: Amanda Mullee. 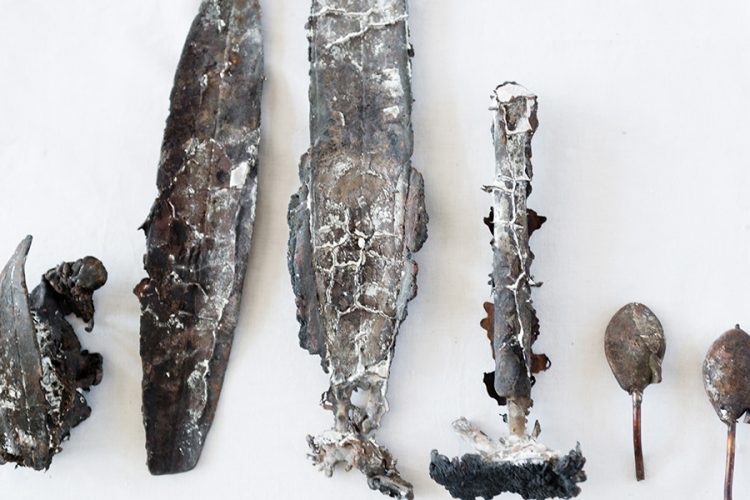