TAG is very pleased to present Sunset, a solo exhibition by the Lithuanian artist Zilvinas Landzbergas (b. 1979, Kaunas) uniting sculpture, animation, and installations in a Gesamtkunstwerk which questions the ideology of progress. Sunset combines pre-existing recent work with a new sculptural installation made specifically for this occasion. This exhibition is part of TAG’s year-long programme exploring a specific relationship to the contemporary object and image, a relationship that problematizes the speculative. To speculate is to anticipate possibilities. Within this domain, TAG’s central focus is on the relationship between object and image in relation to technology, performativity, and interpretation. The exhibition title brings to mind a host of symbols from Western iconography, and evokes images from film, kitsch, and esoterica. In Western culture, the word “sunset” is freighted with all sorts of promising connotation; think of the clichéd kiss on the beach while the sun goes down, used as a metaphor for romance or an expression of faith in a bright future. At the same time, “sunset” conveys the sense of an ending.

Peter Osborne, philosopher and director of the Centre for Research in Modern European Philosophy at Kingston University in London, argues that the concept of the contemporary leads to the projection of temporal unity onto the present, a unity that is fundamentally future-oriented, linear, and speculative: “the idea of the contemporary functions as if there is. . . . it functions as if the speculative horizon of the unity of human history had been reached.” In this respect, he says, the contemporary is a utopian idea, with both positive and negative features. “Negatively, it involves a disavowal of its own future; positively, it is an act of the productive imagination. . . . It is a productive act of imagination to the extent to which it performatively projects a non-existent unity onto the disjunctive relations between coeval times. In this respect, in rendering present the absent time of a unity of times, all constructions of the contemporary are fictional.”


While work on Sunset was in progress, TAG spoke to Landzbergas about his views on the ongoing impact of technological advances on human activity. One recurring theme in this conversation was the prevalent idea that progress is the culmination of historical processes. In other words, these processes lead to a climax and are predicated on the belief that the past can be understood as a preparation for the future. By placing a number of advances, for instance in the media, along a line of development, we can create a historical perspective (for instance, Howard Rheingold has shown that the cave paintings in Lascaux led to the development of the fax machine, mobile telephones, communications satellites, and so on). But there are theoreticians who do not wish to place social developments in a linear perspective. They reject the notion that progress is a unified historical process, such as a succession of technological improvements. Mark Poster is one such critic of the historical perspective. One of the problems he identifies is that this perspective makes all events part of one “totalizing narrative” of “History” with a capital H, which is supposed to lead to a particular ultimate goal or end state, whether good (utopian) or bad (dystopian). He observes that the philosopher of science Michel Foucault formulated a response to this line of thought: his “genealogical” perspective. While this perspective does not rule out a relationship with the past (a temporal sequence), it also offers the possibility of horizontal connections (in space). This is also known as the Foucauldian perspective. Bolter and Grusin build on this idea, emphasizing the importance of links, of relationships and connections between things. We should think of historical processes not in terms of linear sequences, they suggest, but in terms of webs, clusters, territories, boundaries, and areas of overlap.

Artistic strategies affiliated with this latter approach to the contemporary image are becoming increasingly complex, layered, and meaningful, opening up possibilities that encourage speculation and fire the imagination (which in this context is the manifestation of the possible). Such art draws links between fiction and the conceptual, for instance when artists include characters (real or imaginary) in installations, distort narratives and confound our visual expectations, or make use of the biographical or autobiographical genre in connection with materials and sculpture. The combination of almost surrealistic, object-oriented strategies and a conceptual frame of reference yields an experience of ambiguity.


Working with the distinctive properties of his materials, which are usually “impoverished,” Landzbergas constructs situations in which viewers become part of a spectacle, a play in which the actors are missing and the materials and objects take the leading roles. Viewers are given enough clues to create their own narratives, and in the process they become part of the artistic work. Landzbergas’s installations also have a certain theatrical quality, in which the space becomes a stage where the artist acts a mediator of possibilities, speculating about potential outcomes. This often involves the use of “characters”, whose personalities Landzbergas deconstructs and re-presents to his viewers through the immanent qualities of his materials. Using materials such as tree trunks, cardboard, plaster, light, spray paint, plastic, and simple animations, Landzbergas conveys his understanding of the world as a construct, as well as his artistic strategies for intervening in that construct. “The work bears witness to an ambivalent attitude to the fact of time: time is both a sad scenario–as he himself calls it–of predictabilities and a dynamic energy.”

One striking theme in the conversation between TAG and Landzbergas was our contemporary relationship with time, which for whatever reason seems to be marked by frankly apocalyptic thoughts: “The work that I’m presenting in Sunset speaks to the current Apocalypse Fever. Apocalyptic obsessions derived from collective mythologies seem to be coming true, but in fact they are also shaping reality. This theme in my work actually relates to the end of the scientifically constructed worldview, which is destined to collapse. Many thinkers speak of understanding nature in an instrumental and scientific way, but without any real experience of nature. Essentially, this involves a rationalistic map or matrix, based on mathematical models, which is imposed on nature in an attempt to describe and understand and control it. But paradoxically, when we take this approach, we are not truly investigating natural laws and principles, but constructing them through highly mechanistic concepts and definitions.”


Since the dawn of humanity, we have dreamed about how the future might look, often in connection with scientific advances. New technologies create new possibilities; technology not only accelerates many processes, but also opens the door to all sorts of new processes: mapping DNA, for instance, or identifying products, animals, and people at a distance (RFID), or travelling through outer space. These new possibilities are essential to human progress, but they also provoke all sorts of fears. Who will be in charge of how and where new technologies are used? Who will pay for them? And how will they endanger our right to privacy? The moment people start reflecting on the implications of our capacity to build a robot that can play a football match, or clean your house and talk to you, they mix science with imagination, falling back on primal systems of meaning such as mythology and metaphor. They then use poetic devices, simple metaphors, and associative modes of thought to interpret the relationship between people and machines and the connections between the new and the old, the rational and the irrational, the mind and the body.

In Sunset, Landzbergas presents a new sculptural installation, Seven lies (2012), consisting of a group of cast plaster ornaments and visual fragments from the world of Greek mythology. We see Roman, Renaissance-style, and nineteenth-century replicas of portraits and architectural details. The portraits show men and women who are reminiscent of gods and goddesses. Taken together, the mouldings reflect a process of fragmentation and distortion akin to the workings of human memory. Landzbergas comments, “I have a general interest in the portrait genre as a phenomenon. It functions as a code in our culture; throughout Western culture you see fragmented people, both historically and in the present–sculptural busts, faces in magazines, and talking heads on TV. This fragmentation is a bit strange when you consider that these visual idioms have become normal over the years. Plaster, like memory, recasts forms. With no colour and just one material, it’s very reminiscent of the anaemic world of science and rationalistic research. It’s a bit like vanished images, or images from a remembered past– like fragments of broken myths, mixed together into one homogeneous mould.”

Through his classification of objects, his allusions to a variety of historical periods, and his ambivalence between the two, Landzbergas hints at possibilities, bringing a kind of “new era” into being. This is like João Ribas in “On the Contemporary” (a supplement to Mousse magazine), who invokes the spirit of Frederic Jameson: “not merely a temporal discourse, a particular relationship to time itself. The contemporary is a time experienced as a new temporality, a present that makes demands on the past and the future.” Landzbergas’s three-dimensional collages offer no suggestion of a brighter future, but his selection of objects, found materials, and adapted materials makes us think about the status of the contemporary image. This situates his work in a “historic present”, as Ribas so aptly puts it in his article.


When you enter the exhibition as a viewer, through a large wall with “Sunset” painted on it in large letters, as if entering a film set, you find yourself in a dark room, which you gradually discover to be a kind of alchemist’s workshop in which all the objects are made of wood. All kinds of objects and animals–books, instruments, serpents, birds, and minerals–are arranged around a desk at which a writer, scholar, or other creative spirit could sit, and where focused contemplation could bring forth new worlds. When you move on to the next room, you find elements that allude to the history of art–the landscape, the portrait, or classical architecture–and to the role of the artist. An ironic twist compels the viewer to continually redefine his or her position vis-à-vis the continuous stream of media images.


Sunset is kindly supported by the City of the Hague and the Mondriaan Fund. 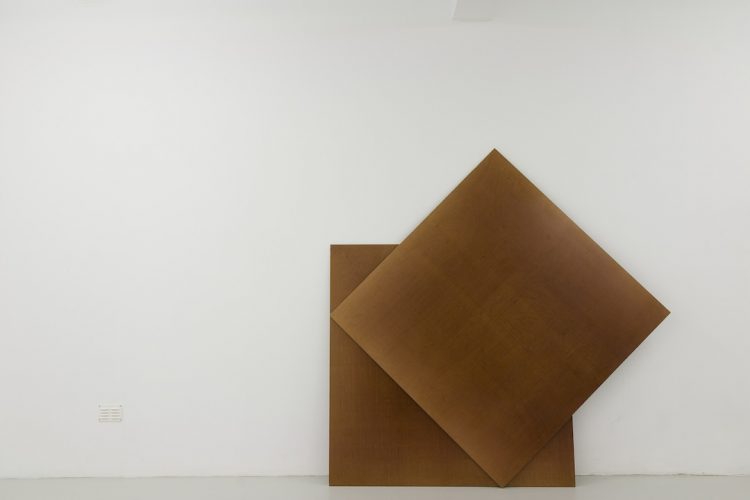