This year it was forty years ago that the moon landing took place. The moon landing is the ultimate example of the achievement of a poetic dream by rational means. Against the backdrop of the Cold War, this lunar odyssey strove to show the entire world just what man was capable of. Lunar Distance refers to this event. The moon landing marks an important turning point in history; it is the beginning of a new world in which technology is omnipresent and embraced, but at the same time a high degree of skepticism exists with regard to the ‘truth’ of images (there are still many people who believe that the moon landing never took place). The exhibition's title is taken from an ancient method of nautical navigation using a sextant to measure the distance between the moon and stars to compare universal Greenwich time with local time, and to an eighteenth-century navigation method which determined the degree of longitude based on the position of the moon, stars and planets.


‘The true is precisely what is made ’ observed Italian philosopher Giambattista Vico as early as the eighteenth century. During the Modernist period, art was still believed to possess the power to make statements of universal value. Today, a growing number of artists seem to share the conviction that reality is a construct of the individual mind. Lunar Distance brings together artists who in an apparently objective manner investigate the relation between image and meaning on the one hand, and on the other investigate the perception of reality in a digital era. The exhibition systematically scrutinizes the relation between logic and subjectivity. By presenting artistic processes that display an analogy with data processing (fragmentation, duplication, repetition, deceleration, categorisation, etc), Lunar Distance examines ways in which we can find an answer to the ultimate question of how, in our present time, we can know the world through ‘image’. 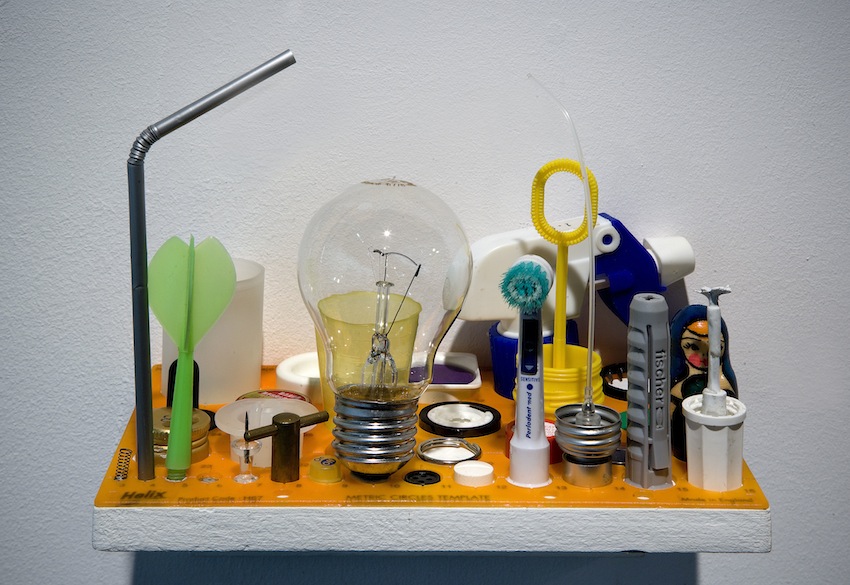 At first sight, the participating artists combine objective, predominantly constructivist approaches to form and material with a personal quest for universal meanings. In so doing, their focus is on the process and time constitutes a vital parameter in many respects. The majority of the works in the exhibition have no clear beginning or end. This is abundantly obvious in relation to the videos shown as a loop, although similarly applies to the objects and installations. Ceal Floyer (Karachi, 1968) collects everyday objects, setting them out in a plastic Helix circles template. She goes on collecting odds and ends, fitting them into templates; there are different versions of Helix. In an age defined by digital technology, one of the most important advances in our contemporary notion of reality centres on the treatment, processing and storage of information. 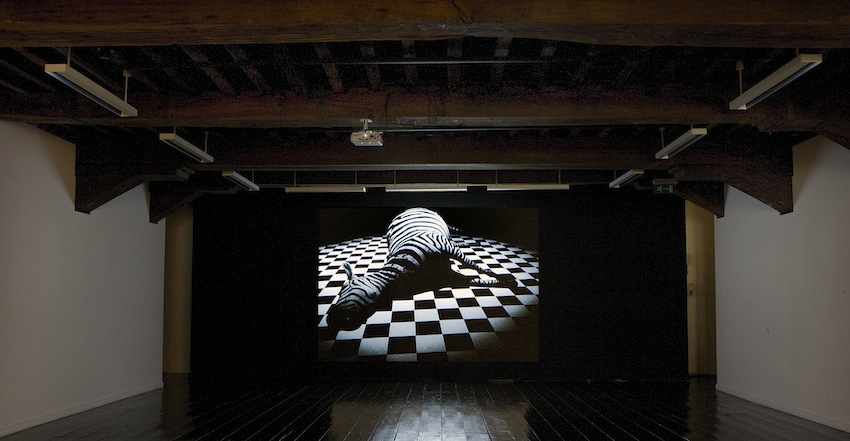 From the video collection of De Hallen Haarlem the work Sehnsucht, by Jeroen Eisinga (Delft, 1966), has been selected for this exhibition. In Sehnsucht (2002) we see a dead zebra lying on a black and white checkered tarpaulin. Eisinga took photo- graphs of the zebra during the process of decomposition, and then edited these in succession to create a cinematic sequence. As a result, we watch as the cadaver bloats and shrivels. The apparently objective recording of a natural phenomenon is reminiscent of a scientific report, but ultimately this film is more about conveying a sense of uneasiness, vacuity, absence and futility. This work was chosen for a good reason: it is exemplary for the recent collection and exhibition policy of De Hallen Haarlem, in which the emphasis lies on a tendency that the art critic Jörg Heiser has described as Romantic Conceptualism. What Heiser means by this is that there is a growing group of artists who- se work expresses a longing for meaning. In that longing they combine apparently rational methods with often unattainable (and thus romantic) objectives. Thus the conceptual is linked with the poetic and the melancholy.


About his work Eisinga says: “The German word “Sehnsucht” [nostalgic longing, ed.] does not refer to a place or person. It can also refer to something that happened, and equally to something that never happened. It’s very abstract. My film is about this absence, the void, something that isn’t there, the hiatus and the pain this causes. It is about the pain of not knowing. If you can study a ‘thing in itself’, I want to study ‘the lack of that thing’. It’s really about missing something, not knowing, not experiencing, not living and, in a sense, about Death in life." 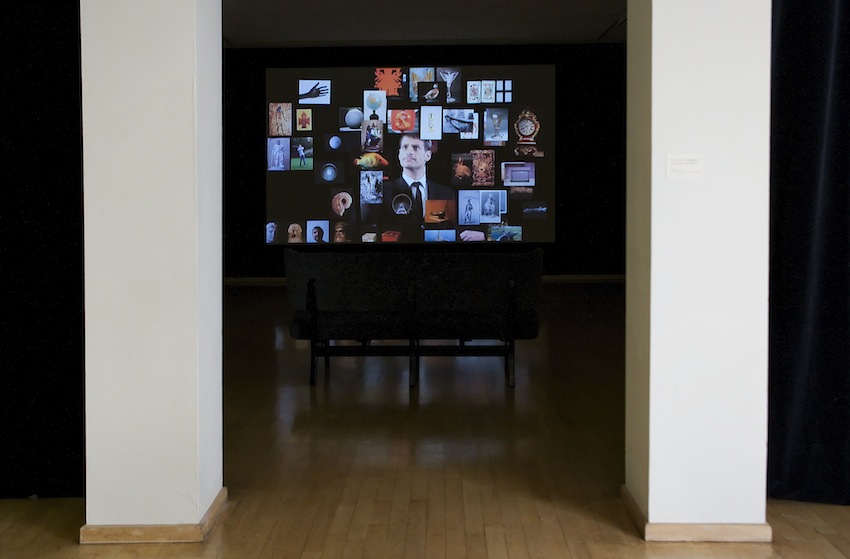 In the video Théâtre de poche (2007) by Aurélien Froment (Angers, 1976) we follow a magician who arranges images from different contexts and combines then again in an associative manner. The video is based on Arthur Lloyd, a magician from the 1930s who was also known as the Human Card Index. Rather than the standard conjuring tricks his repertoire consisted of producing from his jacket almost all the pictures one could imagine, from the Leaning Tower of Pisa to a receipt from the chemist’s shop.


Under the title Parallel Compositions David Maljković (Rijeka, 1973) combines collages of photographs from the surroundings in which he grew up with fragmented images of modernist interior design guides. He investigates how the remains of socialist Yugoslavia are connected with his personal memories of places from his childhood. Lithuanian artist Žilvinas Landzbergas (Kaunas, 1979) has been invited to create an installation in the cabinet of De Hallen Haarlem. Drawing on the specific qualities of materials Landzbergas constructs situations in which spectators become parts of a spectacle, a play in which the actors are absent and the materials and objects take the leads. 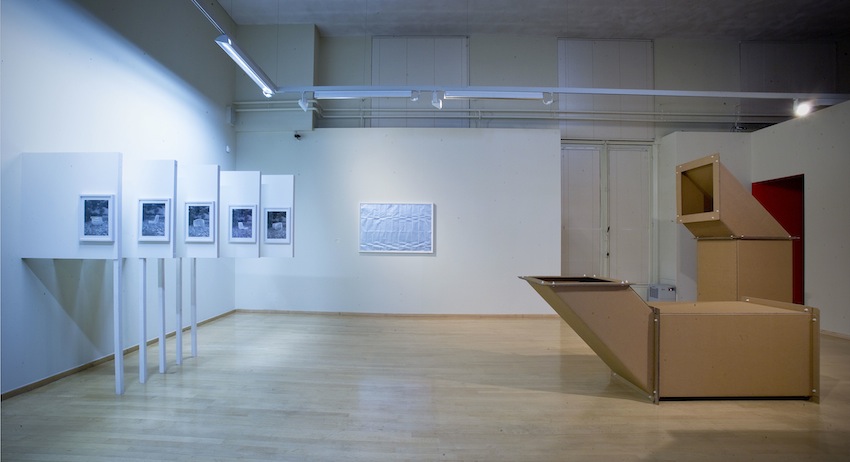 This also applies to the work of Anna Barriball (Plymouth, 1972), Douglas Gordon (Glasgow, 1966), Christoph Keller (Stuttgart, 1969) and Charlotte Posenenske (Wiesbaden, 1930 – 1985), which is also included in this exhibition.  Charlotte Posenenske (Wiesbaden, 1930-1985) is considered a seminal German Minimalist. Her work however, combines a tightly objective approach to spatial objects with social ideals. Several of her large corrugated cardboard objects can be seen in the exhibition. They enter into a relationship with the space within which they are positioned, and bear a resemblance to square ventilation shafts. These modular elements can be endlessly combined based on a number of rules; it was Posenenske’s intention that her objects would invite members of the public to rearrange them. This kind of public participation forces the role of the artist into the background, the objects begin to lead a life of their own and the spontaneous actions signal an intervention in the present situation. Having come to the conclusion that the revolutionary potential of her work did not extend beyond the art world, in 1968 Posenenske announced she was giving up art altogether, publishing a manifesto to this effect in Art International; she chose to study sociology instead.


The video installation Remote Viewing 13.05.1994 (Horror Movie) (1995) consists of a large projection on a free-standing screen of an empty row boat afloat on a river and the sound of a radio not tuned in properly and sending out static. Douglas Gordon (Glasgow, 1966) based the video on a brief scene from the 1945 film Leave Her to Heaven (1945) by John M. Stahl; a Technicolor production predominantly concerned with life’s dramatic aspects, feelings of jealousy and quelling these emotions through violence. The projection of the empty row boat asks a number of questions. Where are the boaters? What event does the date in the title refer to? Why the title Horror Movie? The ever-bobbing boat disrupts the linear structure of the film upon which the work is based. By slowing events down and stretching a moment to infinity, a vacuum is created in which past, present and future converge; a so-called narrative stasis. 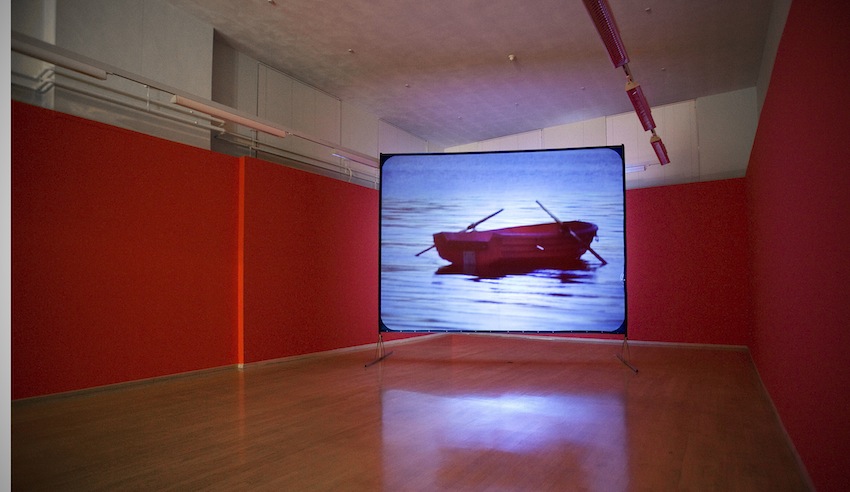 Anna Barriball (Plymouth, 1972) deploys a method akin to the ‘frottage’ technique used by surrealist Max Ernst to allow coincidence to shape his work. In reproducing the surface of ordinary objects, Barriball shrouds them in paper, then rubs them vigorously with graphite. A door appears and a map of the world, the visual information concealed behind the pencil strokes. Last but not least, Christoph Keller (Stuttgart, 1969) manipulates photos of space observatories, by showing the negatives he shifts the direction of the researcher’s gaze.


Ultimately, the works in Lunar Distance appeal to specific desires: to our longing for truth, objectivity and impartiality. In other words, to our desire for moral and political innocence. 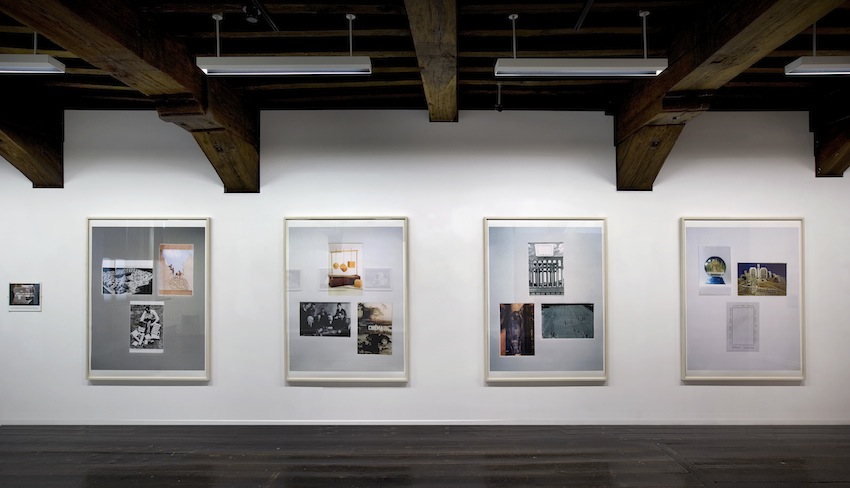 
On 28 November performances and lectures will be presented in De Hallen Haarlem in connection with this exhibition. For further information about them go to www.dehallenhaarlem.nl