Politics of the image


TAG is pleased to present Double or Nothing featuring works by A.K. Burns, Leidy Churchman and Eileen Maxson. The exhibition explores artistic methods of simultaneously inflating and puncturing the authority of persons, institutions and objects. Through their work, the artists in this exhibition investigate ambiguous transmissions of desire. The expression “double or nothing” alludes to a betting coup, where an unfortunate gambler can cancel his debt if he wins the next bet, or double his dues if not. Used in countless films, the phrase evokes the politicized roles and functions of media and the creation of identities.


In Paul Auster's The Book of Illusions, “Double or Nothing” is the title of a fictional slapstick film in which at one point the main character, Hector, becomes invisible. This gives his nemesis, Chase, the perfect opportunity to steal everything that makes Hector's life meaningful. For instance, Auster describes how Hector looks on in despair as Chase, after writing a farewell letter in Hector's name, goes after his wife and takes over his job. After a few incidents like these, however, the spell is broken, and Hector is once again a man of flesh and blood. When he first sees himself in the mirror again, he takes a moment to reflect on the experience: “He is no longer the old Hector. He is someone else now, and however much he might resemble the person he used to be, he has been reinvented, turned inside out, and spat forth as a new man.”

The phenomenon of transformation – both material and personal – is central to the exhibition at TAG. With humour, often black, and references to the 1990s, Eileen Maxson's videos, performances and installations investigate the nature of communication and the creation of identity. The artist plays diverse roles in many of her own videos. By playing melodramatic characters or combining simple gestures with surprising medium-specific interventions, Maxson undermines our conventional approach to media images and the products of our American-dominated consumer society. Much of her new work is composed of stock footage purchased on the internet, readymade material intended for use in advertising. Maxson transforms this material into contemporary relics of internet communication. Her working method seems to be what the critic Jörg Heiser has called a "slapstick" strategy. Heiser describes this artistic method as a way of simultaneously inflating and puncturing an individual, institution or object: "[It is] a sudden jolt in a smooth sequence, an absurd attack of hiccoughs in everyday life and world events, allowing us to catch glimpses of the truth about ourselves and our relations with others. There is something liberating about this, and something moving."

At TAG, Maxson presents a constellation in which prints, videos and sculptures interrelate but do not add up to a finished story. One of the components is a diptych of prints in which groups of men hold up banners with the words "Evian" and "naive". This palindrome comes from a scene in Ben Stiller's classic 1990s film Reality Bites. On websites like 419eater.com, scammers who use false identities to persuade their victims to send them money are exposed and ridiculed, often in playful and entertaining ways. One common way of accomplishing this is to instruct the scammer to do something – for example, to take a photograph of himself with a number of "props" – in order to prove that he is a real person. "For both obvious and subtle reasons, this archive is troubling. However what I find interesting about these images is affirmative. If nothing else, they operate as proof of a successful communication. The premise may be dubious, but, money and manipulation aside, these documents affirm that people, separated by countless factors and borders, heard and responded to one another. Further than that, they also embody transmissions of time, history and desire." Maxson selected images from this archive of "trophies" and had them re-enacted by posting assignments on the website mechanicalturk.com, a marketplace for work used by people all over the world.

A.K. Burns' sculptural video installation, Touch Parade (2011), is a series of five YouTube video memes that explore "plastic love" or fetish and questions of cultural assimilation. Each video in the series is re-enacted from memory, from fetish videos that did not have an explicit content warning. In an effort to explore what qualifies an image as explicit and illicit, Burns worked with a series of ostensibly insignificant acts – layering pairs of gloves, crushing food underfoot or popping a balloon – to articulate the complexity of cultural assumptions and expressions of desire. "These videos expose how a fairly rigid set of actions and objects, defines our understanding of sex and thereby our bodies. The element of banality and potential for illegibility creates a sexual space that is pre-commodity. In a culture driven by consumption, the ability to define and manipulate desire and impulse is essential. Touch Parade is partially a celebration of sexual deviance and anti-assimilation politics."

Through conducting painterly experiments in his videos, Leidy Churchman traces the boundaries between abstraction, gesture and subjectivity. The artist's medium-specific interventions reflect his fascination with transformative processes and uncertainty. In the three videos shown in the exhibition we see the artist performing actions that grow out of his work as a painter. He smears everyday objects with oil paint and drags them up and down the "canvas". In the process, recognizable compositions appear and disappear emerging from a joyful coming together of colours, shapes and objects. The videos Red (2009), Wet bags (Raft) (2009) and Snakes (2012) are thus functioning as "in-between" paintings that constantly stir the imagination and leave you wondering what will come next.

Double or Nothing is kindly supported by The The Hague City Council and Mondriaan Fund. 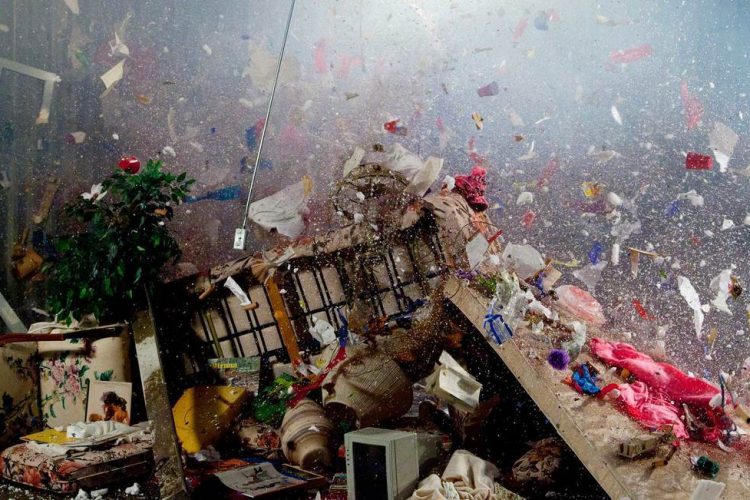