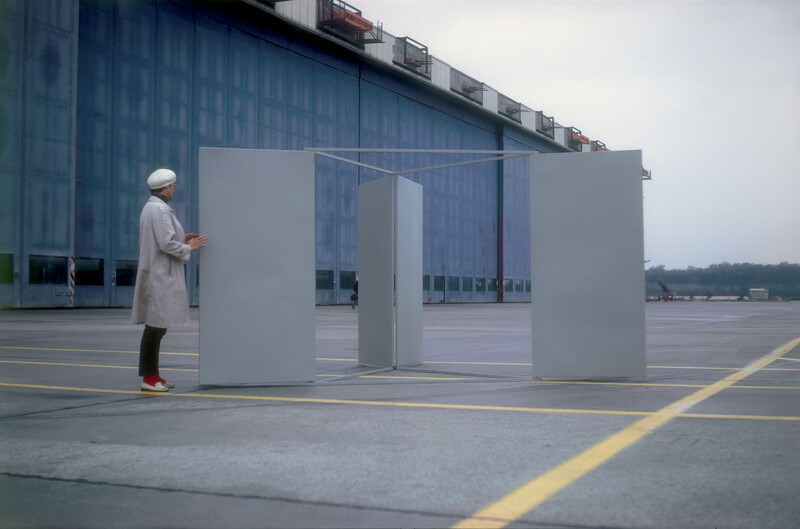 Charlotte Posenenske is one of the most important German minimalists. Posenenske has a clear artistic vision for society—one that she believes must be rational, concrete, accessible, and economical. Her factory-produced sculptural works consist of series in an unlimited edition, made of inexpensive and readily available materials like cardboard and sheet metal. According to several rules, a lexicon for communication, anyone can assemble and install Posenenske’s modular systems and her works can be made over and over again by buyers, curators, and the public.


With her radical and democratic ideas toward material, production, and authorship, Charlotte Posenenske influences and shapes the conceptual and minimal art of the sixties. During these years, Posenenske works with ideas of seriality and the non-hierarchical arrangement of objects. Her work is distinguished by its open character, shared authorship, and the changeable, temporary form enabling it to continue indefinitely. The artist also expresses her social engagement through the installations she creates in public spaces such as airports, train stations, conference rooms, and the street.

Posenenske’s oeuvre develops along a thematic sequence, evolving from multi-coloured paintings and monochrome-painted objects to sculptural and architectural forms made from untreated material that decays over time. As a result, her work will ultimately dissolve into the environment in which it is placed. Disappointed in the social scope of art, Posenenske retires from the art world in 1968 to study industrial sociology. Her decision is an artistic choice, a shift in form but not in content.


In Lexicon of Infinite Movement, like Posenenske, contemporary artists Ruth Buchanan and Yeb Wiersma investigate the boundary between art and daily life. Buchanan asks what role did language and architecture play in Posenenske’s decision to leave the art world? In the exhibition Buchanan’s artwork is structured around various elements of architecture: walls, doors, hallways, and windows. Whereas, Wiersma asks what conversations and sounds circulated through Posenenske’s works when they were installed in various public spaces. Wiersma carefully examines Posenenske’s desire to operate from the periphery rather than the centre.

In recent years, there is a growing worldwide interest in Posenenske’s work and her art has been displayed in numerous exhibitions. Why now? Posenenske’s ideas continue to inspire younger generations of artists. Her work also prompts consideration of what it means to live in a democracy, and how art can offer us tools for building active engagement with the modern world.


Charlotte Posenenske studied at the State Academy of Fine Arts Stuttgart (Staatliche Akademie der Bildenden Künste Stuttgart) under the painter and typographer Willi Baumeister. Prior to her career as an artist, Posenenske was employed as a costume and set designer for the regional theatres in Lübeck and Darmstadt. Solo exhibitions of her work were held at galleries such as Galerie Dorothea Loehr, Frankfurt; Galerie h, Hannover; Kleine Galerie, Schwenningen and Art & Project, Amsterdam. Her work began to attract renewed attention following her death, thanks in part to presentations including Museum MMK für Moderne Kunst, Frankfurt am Main; Documenta 12, Kassel; Museum of Modern Art, New York; Frans Hals Museum, Haarlem; Biennale of São Paulo; and Dia:Beacon, New York.