How can we become more involved with our natural and socio-political environment? And in what way does a place affect foundations of identity? These questions are central to the exhibition Assemblages of Intimacy, with new and existing works by Abbas Akhavan (1977, IR), Eamonn Harnett (1989, NL), Mikhail Karikis (1975, GR), and Eric Peter (1989, NL). The artists focus our attention on a number of unique and remarkable geological places on earth: the area between the Euphrates and the Tigris; an uninhabited workers’ village in Tuscany; the coast of Ireland; and protected areas in the Philippines. Through performance, sculpture, video and poetry, the artists problematize the shifting relationship between culture and nature, questioning our ideas about communality and progress. 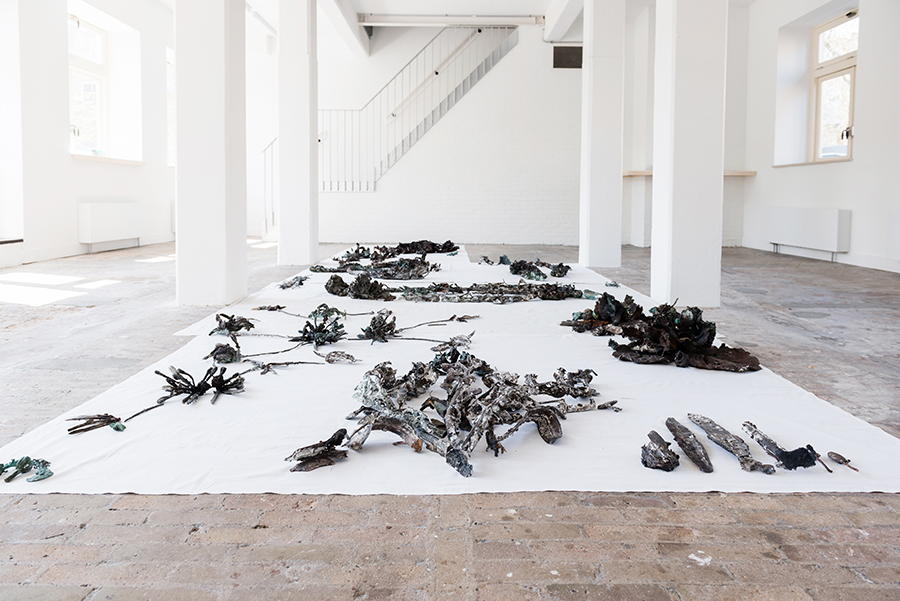 For Reflections upon an unknown country (2018) Eamonn Harnett travelled to the South West Coast of Ireland to explore the utopian ideals of his parents, who ran an llama farm during his teenage years. Harnett juxtaposes the material that resulted from this travel with his recent film Hopes for unity, self articulation and sustainability of a group (2018), which derives from his previous experience of staying with the Agta, an indigenous people who live in isolated mountainous parts of the island of Luzon, the Philippines, along with saltwater aquariums inhabited by North Sea anemones. Through a layering of personal and non-personal references of traditional world views and existing biotope systems, Harnett questions what physically and emotionally heeds us to become more involved, empathetic and at one with the natural environment.


In his work, Abbas Akhavan investigates the capacities of objects and systems to express stark contradictions such as hostility and hospitality, familiarity and strangeness. His ‘studies’ or ‘variations’ have been deeply influenced by the specificity of the sites where he works: the architectures that house them, the economies that surround them, and the people that frequent them. Study for a Monument (2013–15) presents a series of bronze plants laid out on white cotton bed sheets. The work is an attempt to archive plants belonging to regions around the Tigris and Euphrates rivers — present day Iraq — that have been destroyed by Saddam Hussein’s government. Using information from botanical archives, the artist created the plants by hand in plasticine and wax before casting them in bronze. They are presented as a funerary monument or forensic evidence on the monumental floor of the bath house.

Installation views 'Assemblages of Intimacy', A Tale of a Tub, 2018. Photos: LNDWstudio.

In his film Children of Unquiet (2014), Mikhail Karikis orchestrates a children’s ‘take over’ of an uninhabited workers’ village in Italy centering on the children’s aural and physical interventions. The work features forty-five children who are growing up around a deserted industrial village, abandoned by their parents after the complete automation of the local geothermal power plant where they all worked. The site is in the Devil’s Valley in Tuscany, known for inspiring the hellish descriptions of Dante’s Inferno and for being the place where the first sustainable energy power plant in the world was built. In Karikis’ video, youngsters between five and twelve years old seize the depopulated sites, transforming the vaporous wasteland into a self-organized school and a playground.


Eric Peter’s practice encompasses installations, discussions, gatherings, workshops, performances, drawings, text or video works—in which there is an emphasis on exchange, sharing and mediating different thoughts or opinions. The context of other voices, beliefs, processes or narratives within his very personal works, allows for alternatives to our (collective) reality. With his ongoing project Economy as Intimacy, the artist questions the relationship between economy and intimacy. The writing and recitation of poems by the artist about economic exchanges—between sellers, buyers and producers—enables a certain personalization of the economic, at a time when income, wages and debt have become increasingly elusive. The artist does not see his work as a romanticization, but rather as a speculative recalibration of cultural and social norms.


Abbas Akhavan’s practice ranges from site-specific ephemeral installations to drawing, video, sculpture and performance. The direction of his research has been deeply influenced by the specificity of the sites where he works: the architectures that house them, the economies that surround them, and the people that frequent them. The domestic sphere, as a forked space between hospitality and hostility, has been an ongoing area of research in his practice. More recent works have shifted focus, wandering onto spaces and species just outside the home – the garden, the backyard, and other domesticated landscapes. Recent solo exhibitions include Variations on a Garden, Douglas Hyde Gallery, Dublin, (2017); Not titled, Villa Stuck, Munich (2017); Study for a Monument, Mercer Union, Toronto, (2015); Study for a Garden, The Delfina Foundation, London (2012). Selected group exhibitions include: The uses of art; SALT Galata, Istanbul (2017); Tamawuj, Sharjah Biennial 13, (2017); But a Storm Is Blowing from Paradise, Solomon R. Guggenheim Museum, New York (2016); Making Nature, Wellcome Collection, London (2016). Some recent residencies include Atelier Calder, Saché, France (2017), Fogo Island Arts, Fogo Island, Canada (2013, 2016, 2019), Flora: ars+natura, Bogota, Columbia (2015), Delfina Foundation, London, England (2012) and Dubai, UAE (2011). Akhavan is the recipient of Kunstpreis Berlin (2012), The Abraaj Group Art Prize (2014), the Sobey Art Award (2015), and the Fellbach Triennial Award (2016). 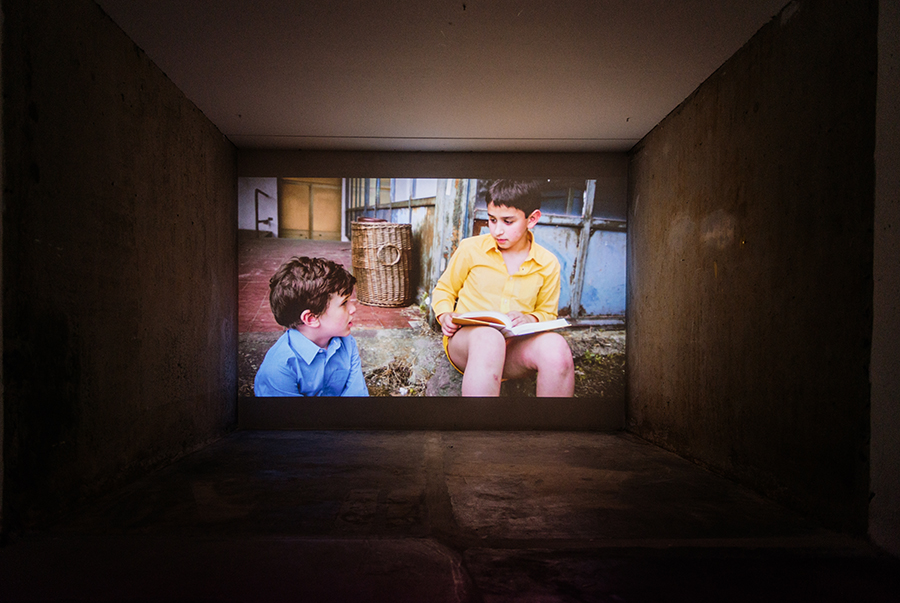 Eamonn Harnett’s work evolves through varied media of film, performance and installations. To him the confrontation with specific spaces for long periods of time is where relationships of kin are build and personified through material means; building identities through material representations that are sometimes either useful or problematic when thinking about natural sustainable equilibrium. To Harnett the global interconnectedness has made the local simplified, its intertwined human to nature knowledge in a process of forgetting. Within his work Harnett attempts to counteract this by getting into contact with material and environmental parameters, as if finding kin, specifics that often unconsciously reference to his own youth growing up in an Irish countryside. Harnett studied at the Gerrit Rietveld Academy, where he was the recipient of the Rietveld Fine Arts Prize 2013, awarded by a jury consisting of David Jablonowski, Rob Johannesma, Rieke Vos, Steven ten Thije, H.W. Werther and Bregje van Woensel. Subsequently he was a resident at De Ateliers in Amsterdam between 2014 – 2016. Harnett showed his work, among others, at the Frans Hals Museum | De Hallen Haarlem (Haarlem), Kunsthuis Syb (Beetsterzwaag), De Ateliers (Amsterdam) and Art Rotterdam, as a participant in Prospects & Concepts 2018, organized by the Mondriaan Fund. 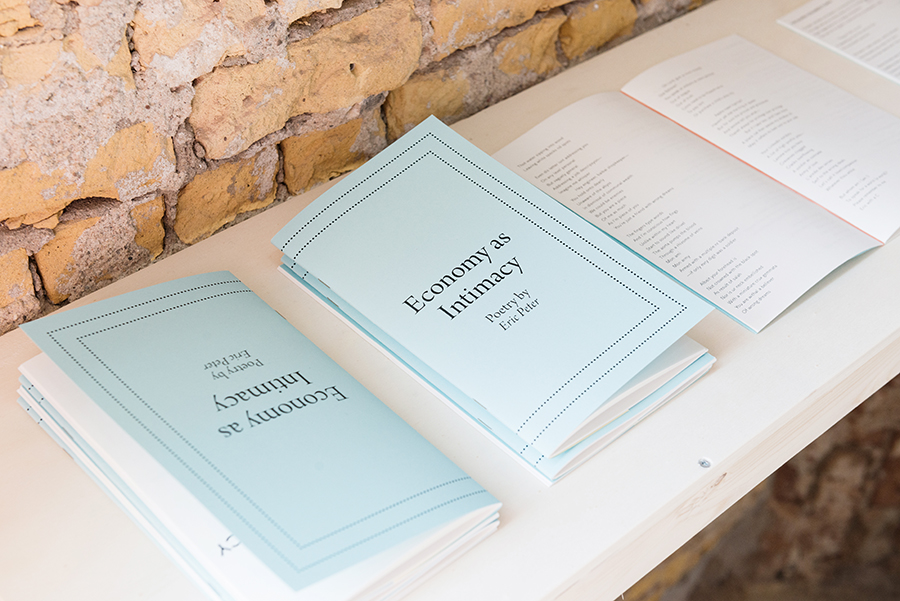 Eric Peter, Economy as Intimacy, 2018, publication and reading(s) as part of Assemblages of Intimacy. Photo: LNDWstudio.

Eric Peter is an artist living and working in The Hague, The Netherlands. The common thread to his performance-based practice is a deconstruction of the normative in history making as well as cultural and social norms. Projects can entail installations, discussions, gatherings, workshops, performances, drawings, text or video works—in which there is an emphasis on exchange, sharing and mediating different thoughts or opinions. The context of other voices, beliefs, processes or narratives within his very personal works, allows for alternatives to our (collective) reality. A reality beyond the pattern of expectations, biases and stigmas made evident through investigative and often collaborative projects. He holds a BFA in Interdisciplinary Attitudes from the Royal Academy of Art in The Hague and currently pursues an MFA in Art Praxis at the Dutch Art Institute (DAI). Peter has been awarded the KARA 2018 and was shortlisted for the Sybren Hellinga Prize in 2016. Recent presentations include:‘Witness’, Karachi Biennale 2017, Karachi, Pakistan, group (2017); ‘Prospects & Concepts’, Art Rotterdam, Rotterdam, The Netherlands, group (2017); ‘Ondertussen’, Stroom, The Hague, The Netherlands, solo (2016); ‘Everybody’s Perfect’, Spoutnik, Geneva, Switzerland, group (2016); ‘BINISAYA’, SM Seaside, Cebu City, The Philippines, group (2016); ‘Conversation Piece’, 1646, The Hague, The Netherlands, duo (2016); ‘Shifting Spaces’, W139, Amsterdam, The Netherlands, group (2016); ‘Conversations on the Near Future’, 98B, Manila, The Philippines, solo (2015); ‘Between Thinking, Seeing, Saying and Nothing’, IVS Gallery, Karachi, Pakistan, group (2015).

During Assemblages of Intimacy, A Tale of a Tub, together with the Poetry International Festival, is working on a program of presentations by poets from all over the world. This year the festival looks at the relationship between poetry and nation under the title POETRY OF A NATION / THE NATION OF POETRY with ‘nationalism’ being the central perspective of the festival. Poetry that embraces origin and national identity is brought together with poetry that opposes claims on origin and national identity. More information about this program, which will take place in the last week of May, will follow shortly.


Assemblages of Intimacy is kindly supported by the City of Rotterdam. Eamonn Harnett’s travel in the Philippines was made possible by a Young Talent Grant from the Mondriaan Fund. Special thanks to the Family Servais Collection for the loan of Study for a Monument (2013–15).