Agency of objects, boundaries of representation 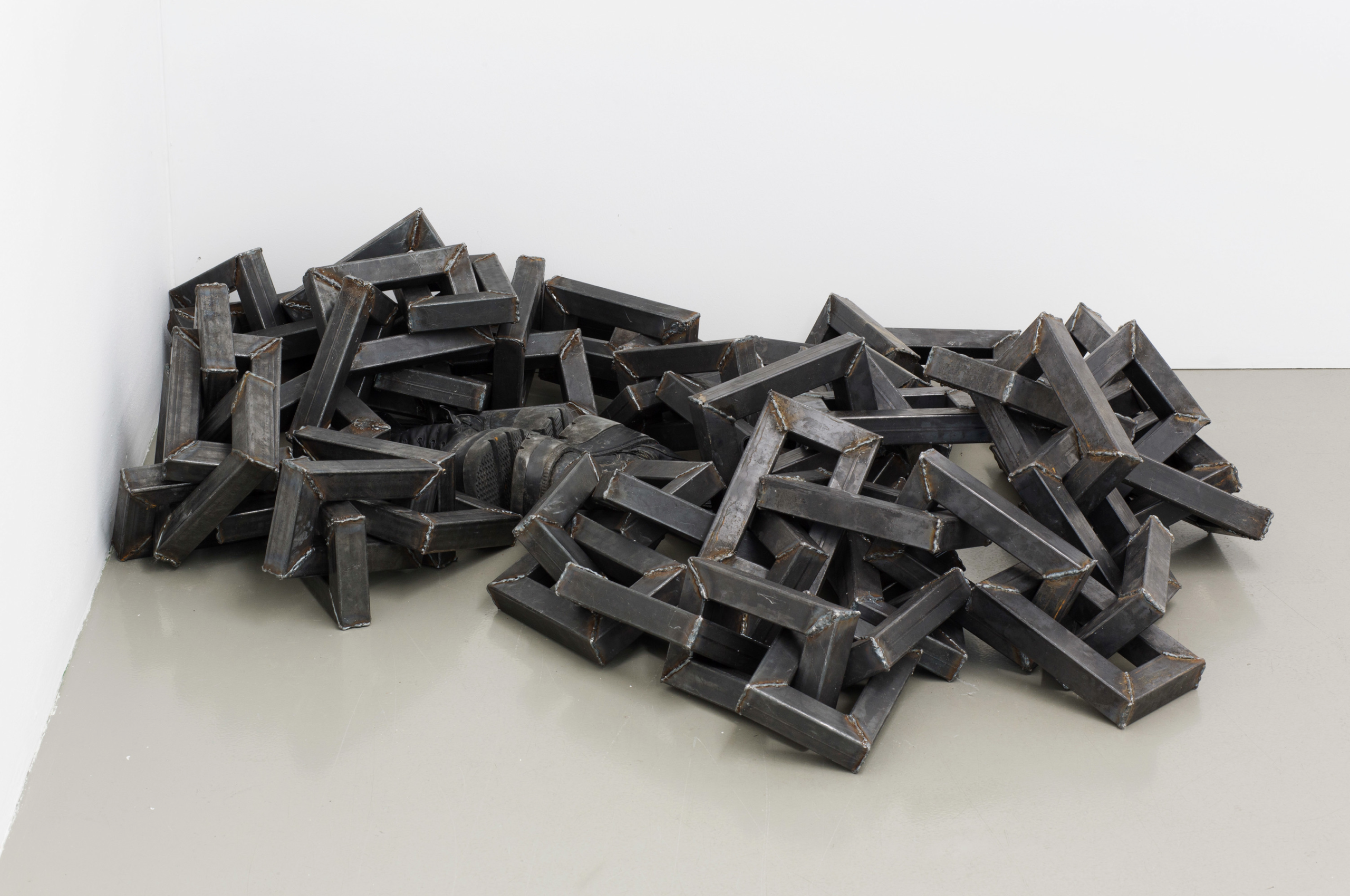 Suzanne Wallinga: We see a tie on the wall with a text on it that reads: “my wings unfold like butterflies” — is transformation an important theme for you?


Sophie Stiller: I think it’s special how humanity has the potential to keep changing and to adapt. The things around us are in perpetual motion, and this process is both beautiful and painful at once. I consider this a process of learning, ceaseless development, and continuous change are interesting themes; you need to take many steps in order to get any further.


SW: Your work comprises poems, sculpture, and objects. There appear to be linguistic connections between all these different elements.


ST: I find written language very appealing, but I also find it complicated to work with. Often, I am making personal experiences tangible to others. I wrote the poems especially for the exhibition. They are connected with the sculptures. In making the sculptures and objects, I start out with a feeling. When I write, I often have a specific image in mind. Like for instance the poem that can be seen upon the wall of the in between space. I thought about what it would sound like if we could hear all the heartbeats of all the people in the world at once in our sleep. It would be a raging storm of sound, almost like a flood. The circulated pumping of all this blood is a wave of the changing tides. Sometimes I feel as if I’m asleep and don’t see what’s going on around me in the world, but when I wake up, I hear the sound of millions of footsteps upon the floor. It is as if all the people in the world treading upon the earth, all at once, are the cause of an earthquake. 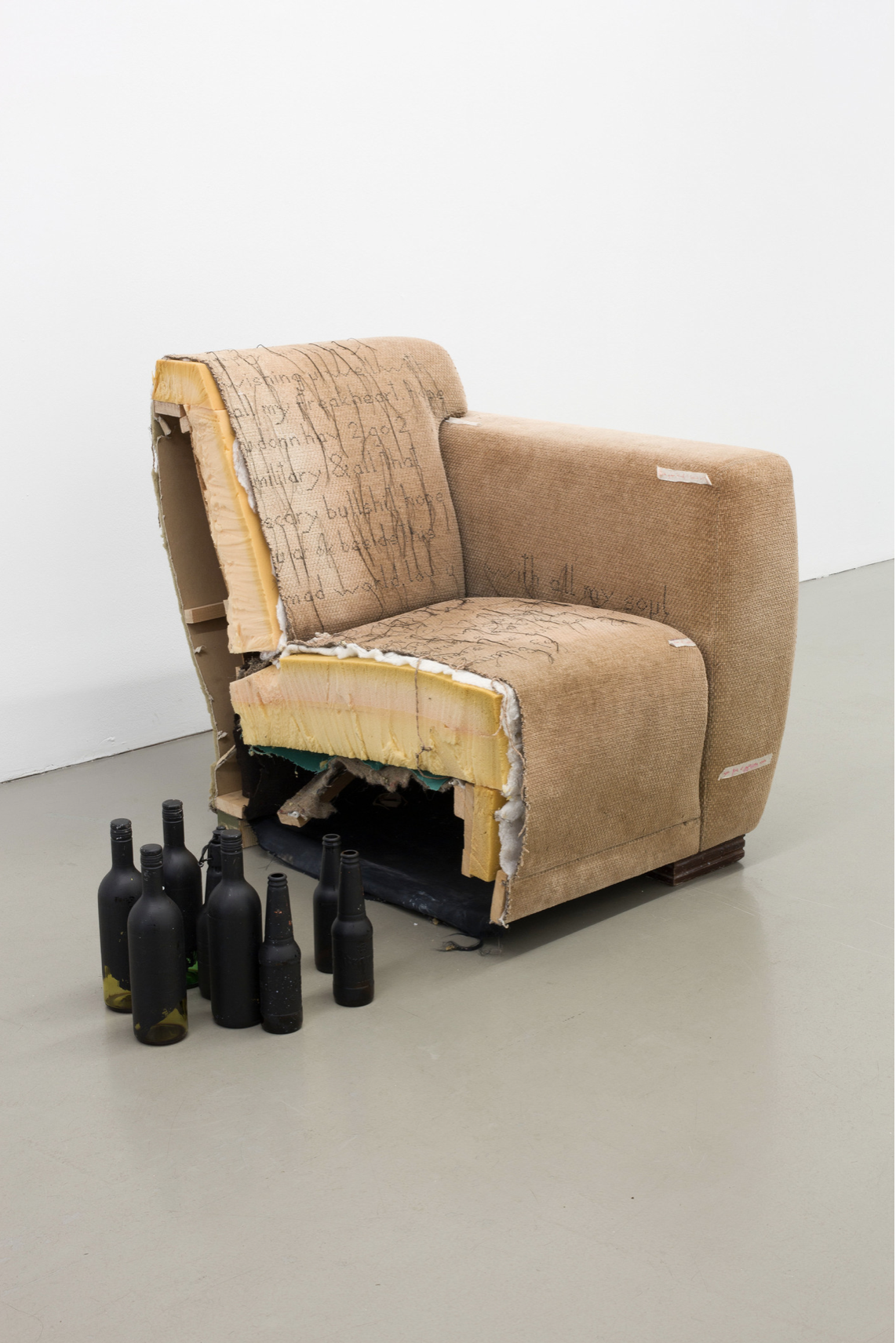 For a number of years I have worked with shoes and boots, they have become a recurring theme in my practice. I find them and customize them; I edit them, cut them up, or paint them. You will find boots in the space, a kind of military boots. Shoes are to me a symbol of freedom, of movement and the autonomy to go wherever you want. An earlier work of mine consisted of a pile of shoes, this pile was incredibly present and conjured a lot of dark associations in people, such as of Auschwitz. I can’t control the process by which this happens, because I don’t know the histories of the people looking at my works. Personally, I have not experienced war, nor am I in a position to simulate such an experience. However, what goes on in the world does resonate with me. I can understand these peoples’ reactions. It is an open work to which the spectator may have an experience that is entirely their own.


For this exhibition I combined a pair of boots with a metal chain upon the floor. I laid them on the floor as if in the act of prayer. Besides the metal chain I made a second chain of ceramic shackles and painted it with wine. I found a chain belonging to a houseboat in the street in Amsterdam; it was a rusty chain and had been under water for years. I wanted to make a metal chain myself. However, I was hesitant. Why did I want to work with an object that so clearly conjures a history of violence? The chain is a fairly dominant image, it is almost violent by itself. A chain suggests imprisonment, slavery. There are, however, also other connotations — this interests me. Perhaps it is a chain for saying prayers, or a chain belonging to an anchor. It is precisely this depth of interpretation that appeals to me. I like the interplay between the coarseness of the materials and the associations that the images conjure, and the experience of vulnerability. It is the tenderness that resounds in the words of the poems.


SW: The manner in which you combine sculptures, objects, and language with each other reveals a balance between an intuitive, and precise way of working.


ST: I work with the tension between stability and fragility, and everything that has to do with this. The objects, texts, and sculptures belong to each other, but also exist on their own terms. They are part of the same world, yet a lot is happening in one work. One work I made, not included in this show, is a garment that is hung from the ceiling as it drags upon the floor. The garment is facing ahead, as if it were leaning against the weight of the world. For some people this work makes them think of a djellaba, a Moroccan dress. Others are reminded of a Celtic, ritualistic robe. I made the print and sewed the dress while thinking of a sleeping bag, or even a pair of pyjamas. It is a garment in which one is imprisoned, but which simultaneously has a protective function. 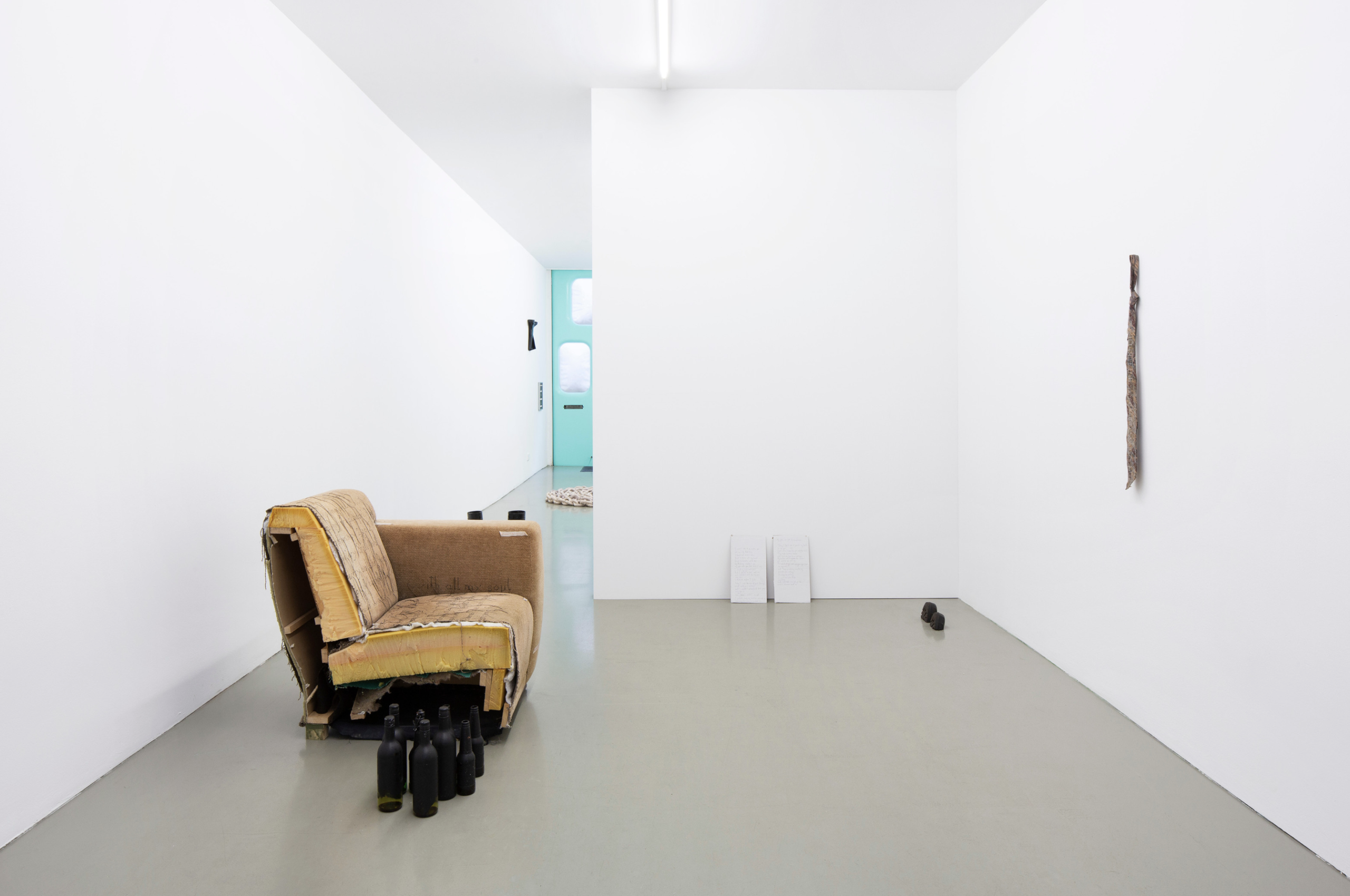 SW: Storytelling seems to play an important role, did you grow up in a family of storytellers?


ST: I grew up in a family of opera singers. The impulse to tell stories, however, arises from working with recognizable objects, ones which you may have a clear association to. I play with those moments of recognition and connect various materials, objects, and ways of working in order to see what may emerge. In this process I am searching for a certain tension, a moment of surprise. I am inspired by music and poetry too. It is intriguing how the works of poets and songwriters manage to appeal to such a vast audience, as with for instance the German songwriter and musician Rio Reiser, or the way in which the romantic poet Karoline von Günderrode describes emotions. She was one of the few female poets we know from this period to have played a unique role. Her direct manner in her writing is timeless. The work of Louise Bourgeois is also admirable in her ability to tell personal stories through the connection between language and objects. 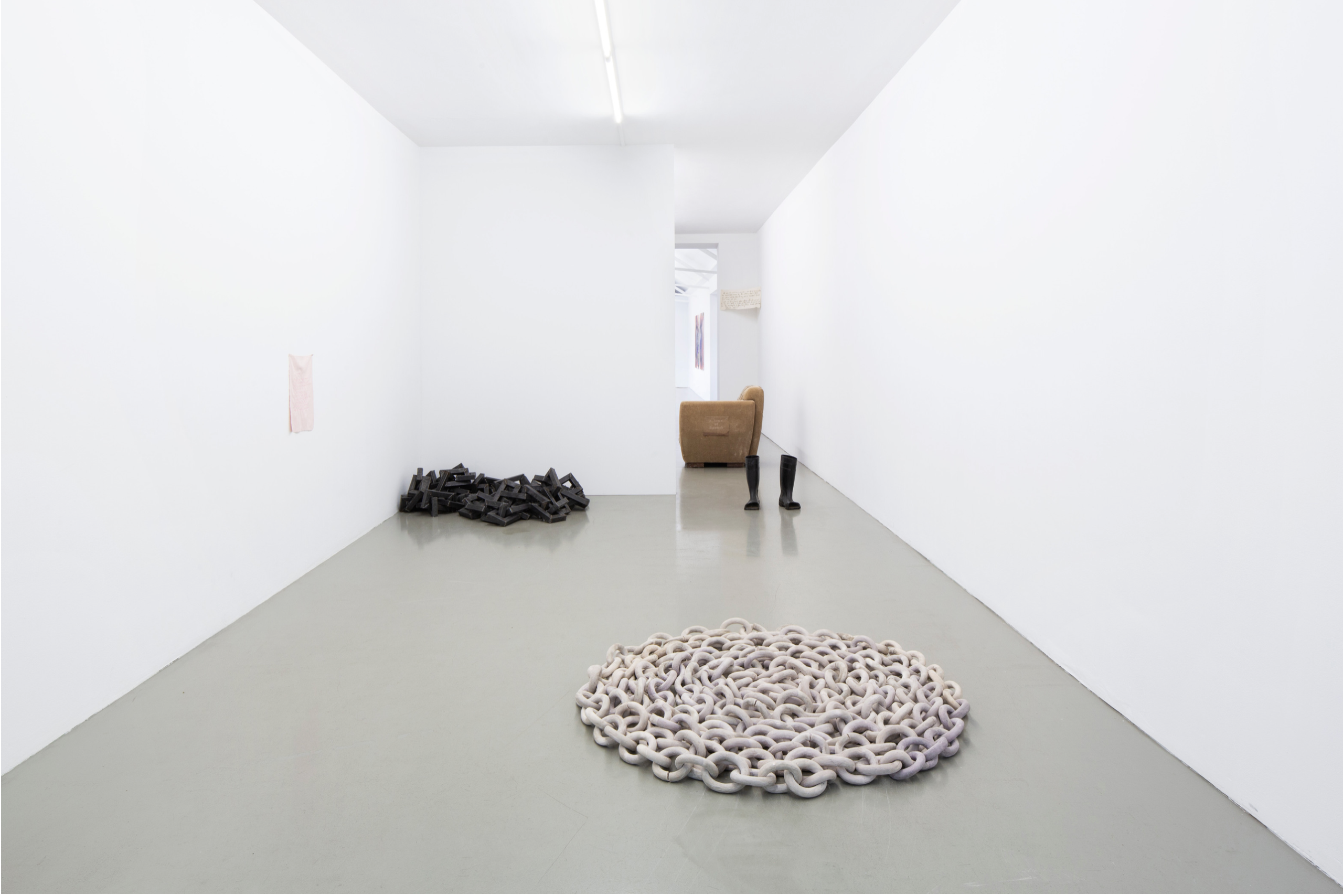 SW: The way you use time is very interesting. We see images that relate to our memories, but the poems create a connection with another age, your words appear to project towards the future.


ST: A desire is also being voiced. You can experience time in different ways, sometimes it goes past quickly, while other times a small moment lasts an eternity. Sometimes you struggle in order to find your way through time. Sometimes time takes its own course. A couch, for example, is an intimate setting, but one in which you can also feel imprisoned, depending on what goes on in your life. I knew early on that I wanted to saw the couch in two. The text came later, it is a letter addressed to someone.


SW: What is your wish for the exhibition?


ST: I can’t predict what will happen, but I hope to learn from the experience through dialogues with people and to gain fresh insights.


SW: Lastly, the floor is noticeably present in your work?


ST: That’s right, I brought together a lot of works upon the floor, the chains, the boots, and the couch. This has to do with the storm of beating hearts among other things; when there is a storm you lie on the floor. You look for protection. An anchor lies on the floor. I was looking for a way to ground the works.